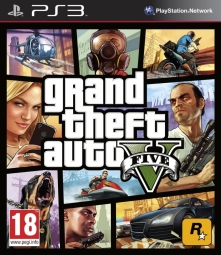 Welcome to Los Santos in the largest and most ambitious game yet from Rockstar North.

It's just another beautiful day in Los Santos; the sun drenched streets bustle with life, while its inhabitants bask in the faded glories of this once-great metropolis. The silver screen has made way for cheap reality TV, wannabe movie stars wait tables, self-help gurus just want to help themselves while ordinary decent criminals are trying new ways to make a dishonest buck.

Amongst this melting pot, three very different Los Santos residents are trying to find their own way in life; albeit, often on the wrong side of the law. Michael, Franklin and Trevor may come from different worlds, but there's one thing that draws them together: they each feel that life has dealt them a bad hand and want to take back a piece of the Los Santos sunshine for themselves - any way they can.

When fate, fortune and their chequered pasts throw them together, this unlikely crew hook up to plan a series of dangerous, daring heists that could set them up for life... or put them in the firing line of the big-time criminals that blight the city.

Life in the big bad city and beyond

The Los Santos city map plus surrounding countryside, mountains and desert landscape is larger than the worlds of GTA IV, GTA San Andreas and Red Dead Redemption combined. Every inch of the map is teeming with life and it's entirely open for you to explore from the start of the game.

The living, breathing city has everything you'd expect from a bustling metropolis - shops, bars, clubs, garages and much more - and you interact with it all. If you get tired of the rat race, head out to one of Los Santos' golf courses, play tennis, practise your aim at the shooting range or indulge in one of the other many hobbies you're free to take up. If that's not for you, find your favourite car, customise it any way you want and cruise around the city blasting tracks from one of the many radio stations.

Away from the city, you're free to escape and roam the Vinewood Hills, explore the Grand Senora Desert, climb Mount Chiliad, swim in the Alamo Sea and almost anything else you can imagine. Wherever you go, you'll find other people exploring the great outdoors, fishing, hiking or even getting involved in extreme sports like sky diving and BASE jumping. Wildlife roams the land, fish swim in the rivers and sharks patrol the oceans. The GTA V map may be enormous, but there is never a moment when it feels empty.

A cast of thousands

Throughout the game, you play as three main characters, Michael, Franklin and Trevor, and you can switch between them whenever you like. While you're controlling one character, the other two will carry on living their lives, so you never know where you'll find them.

Each character has stats which will level up as you progress through the game; go running or cycling and you'll get fitter, while heading to the shooting range will improve your aim. Aside from the main characters, there's a huge supporting cast to interact with - including Chop, Franklin's pet dog who you'll even be able to control in some missions.

Whoever you're playing as, the Los Santos map will be full of missions and jobs to do. Look out for the "Strangers and Freaks" side missions that range from earning cash by towing cars to chasing celebrities as a part-time paparazzi.

As you progress through the game, Michael, Franklin and Trevor will come together to work as a crew in pursuit of their big score. You'll have to plan daring heists, from stocking up on weapons and equipment and hiring crew members to pulling off the job and taking out anyone who tries to stop you. Switching between characters will give you different perspectives on the action, like moving from Trevor's high-up sniper position to the thick of the action as Michael and Franklin unload their weapons and lob grenades. The heat of the action is an ideal place to use each character's special ability; Franklin can slow down time while driving, Michael can enter a bullet-time shooting mode, while Trevor can harness his rage to take down any enemy.

Of course, pulling off these jobs will attract the attention of the police and other criminal gangs. Break the law and you'll get a wanted level; one star for a minor crime, all the way up to a five-star rating that will see the full force of the law on your tail - and they don't give up easily.

The information provided on this page is a property of the manufacturer or the brand.